skip to main | skip to sidebar

On the 6th August, 2013, a Victorian magistrate confessed to molesting two teenage brothers and was expected to quit his post on the bench.

The very thought that he would not be SACKED from the role astounds me and should astound every Australian citizen.

He confessed.  He molested two teenage brothers.  And he gets to quit?????

Oh, but it is worse. According to the Herald Sun (no link yet but see below) there are no plans to review his handling of similar offenses during his eleven months on the bench.

No plans to review his handling of similar offenses....

How often has Wonko the Sane brought into question the sanity OR corrupt nature of the justices and magistrates that so often let loose the criminal while the victims spend their entire lives - if they are 'lucky to live' torn apart?

And just to PROVE that the rest of our justice department are corrupt - they are letting his decisions stand unchecked.

After a year or more, Wonko the Sane is back.  He speaks.  It is time - more than time - that Australian's got off their back sides and demanded a fairer justice system.  Because the one we have is shit. 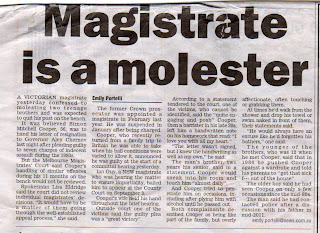 About Wonko the Sane

Wonko the Sane was a character in Douglas Adam's fantastic Hitchhikers Guide to the Galaxy series.

The story runs thus : after all the dolphins disappeared from the earth, their absence was not observed by any except Wonko. So he called himself Wonko the Sane, declared the entire world insane and placed a sign on the exit to his house saying "You are now entering the Asylum".